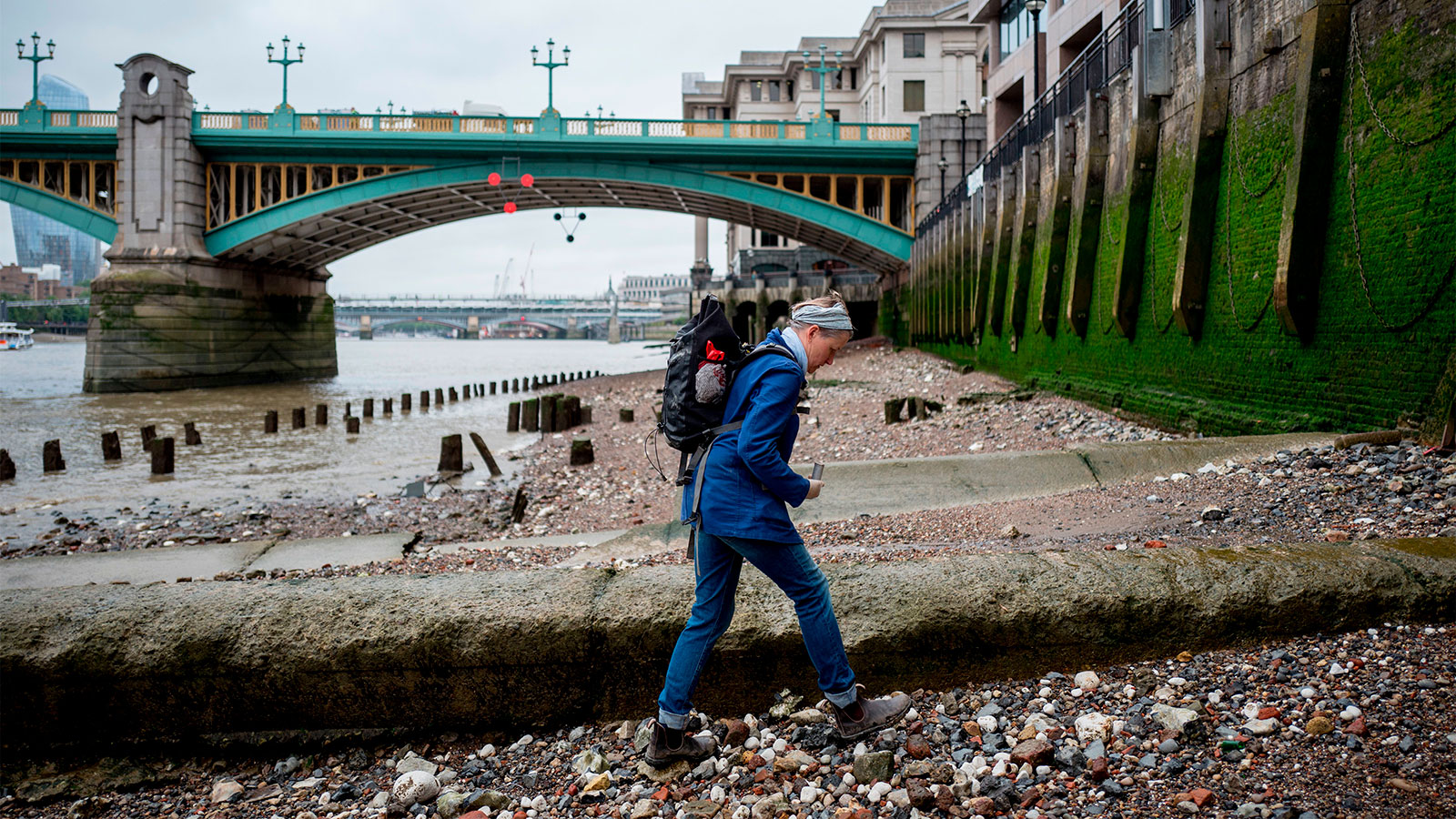 A dirty job? Yes, but an exciting one for Miller, an American historical archaeologist, who was tracking through the riverbed muck of this southern England estuary with Maiklem to create a comparative collection of known London artifacts for archaeological analysis of early American sites.

Sifting through the junk in the Thames may sound unpleasant to some, but in doing so, one is almost guaranteed to find a curious and possibly valuable artifact. Uncovering a piece of Roman pottery, a 1650s-era tobacco pipe or a small, well-preserved wax seal dating back to the time of King Richard III is just the kind of thing that keeps mudlarkers mudlarking.

“It’s the excitement,” Miller explains. “You never know what you’re going to find. It’s just like all of archeology, it’s the thrill of the discovery. What am I going to find next and what is it going to tell me about people in the past? That’s the exciting thing.”

If you’ve never heard of mudlarking, you’re not alone. “People don’t even know what the word means because only a very select group actually uses it,” Miller says. Mudlarking is, essentially, digging through the bed of a river for lost and forgotten objects.

The concept originated in the 18th or 19th century and referred to a time when low-income people — including children — would trudge along the shoreline of the Thames at low tide collecting, Miller says, “nails or pieces of coal or an occasional coin — anything they could sell for food.”

There was plenty to find there. For thousands of years, the Thames served as a dumping ground. “People would throw their daily garbage in the river and the tide would distribute it and it would essentially disappear from sight,” Miller says. “It was nasty, especially as London’s population grew and the Thames became increasingly affected.”

In fact, 60 years ago the Thames was so polluted from centuries of dumping it was declared dead. Thankfully, efforts were made during the 20th century to clean up the river and it is now considered one of the world’s cleanest rivers. But its polluted past has made it one of the best places to go mudlarking. The Thames holds literally thousands of years of trash from the prehistoric era to the modern day. As the old adage goes, “one man’s trash is another man’s treasure.” Mudlarkers can dig up a host of interesting artifacts, including things like Venetian glass chevron beads, Tudor money boxes, pewter medieval pilgrim badges and 16th-century shoes.

Dumping all that junk into the Thames certainly got it out of sight, but it didn’t really disappear. It settled into the mud at the river bottom. “And what’s cool,” Miller adds, “is there’s an anerobic condition which means things like wood and bone and cloth and leather actually survive sometimes in pretty pristine condition.” More durable material like pottery, nails, tobacco pipes and glass bottles get tumbled around a bit but also can remain in very good condition. “I found the top to a wine bottle probably from the late 1700s with the cork still intact,” he says.

What Makes the Thames Ideal for Mudlarking?

The Thames tides create a perfect storm for unearthing artifacts that many other waterways do not have. For starters, its tide has a surprisingly large range. It can rise and recede up to 15 to 24 feet (around 4 to 7 meters), two low tides and two high tides every day, leaving behind a vast swath of exposed river bottom. “Here along the Chesapeake or along the Hudson, you do have tidal action but it is relatively small,” Miller explains. “Up here, it’s no more than 3 feet [0.91 meters] on most occasions.”

The Thames tide also comes in fast — upward of 5 miles per hour (8 kilometers per hour). This enables the current to scour the riverbed and push out a literal treasure-trove of valuables toward the shoreline where they are left behind as the tide recedes.

Of course, technically, you can mudlark the shores of any river in the world, but if you want to travel to England and mudlark in the Thames — or even browse the muddy tidal area without getting your hands wet — you’d better first get a permit from the Port of London Authority. That process takes at least four weeks and costs about £35 ($43) a day for a Standard License. With that license, you’ll only be able to dig about 3 inches (7.5 centimeters) into the mud and are expected to replace the ground you disturb to help preserve the food chain for the river creatures.

Protecting the foreshore’s natural and agricultural resources and keeping mudlarkers safe is of the utmost importance; thus there are some zones where digging isn’t allowed. Restricted areas include the shore along the Tower of London and Queenhithe, a former Roman dock area that was later developed by the Saxon King Alfred the Great in the 700s.

No permits are required to mudlark in the U.S. You may find objects of interest but you won’t find the quantity, and only very rarely the quality that you can find along the Thames. “We don’t have, unfortunately, massive quantities of Roman artifacts exposed here,” Miller says with a laugh.

Regardless of where you mudlark, you may very likely overlook a valuable artifact as junk or mistake a worthless piece of debris for a valuable treasure. In other words, finding lost treasures takes a trained eye and a good working knowledge of antiquities.

Remember that wine bottle stopper Miller had the thrill of finding during his mudlarking excursion in the Thames? Some may have assumed it was trash. But Miller knew it was from the late 1700s because of the style of stopper. “On handmade bottles [from that time] there is an applied piece of glass just below the opening at the top called a string rim. That’s where they tie a cord or wire to secure the cork in place. The style has changed over time. So, knowing the style of the string rim, that’s how I was able to date the wine stopper,” he says.

If you do find something and are curious about its value, contact your state archaeologist or an archaeologist at your local college or university.

Can You Keep What You Collect?

If you think mudlarking has the potential to be a get-rich-quick scheme, you’d be wrong. In England, your permit to mudlark allows you access to collect, but it also explicitly says that when you find materials that may be of value, you must give them to an authority for evaluation. “England has a treasures law on stuff like gold or silver or something like a complete Roman sword — stuff that’s really rare — because that’s the property of the people of England,” Miller says.

In England, that authority is a Finds Liaison Officer, who has access to experts who can help identify what a found object is. These objects are also recorded in the Portable Antiquities Scheme, a project of the British Museum to keep track of all historical artifacts that are found in the Thames and other locations across the U.K.

If someone does find something of great value, museums have the right to purchase the item, for which the finder would be compensated, Miller says. However, many of the items that are found, like “tobacco pipes, pieces of a bottle, a pig’s jaw, a specimen of medieval pottery, or a thimble,” he says, “are so common and such domestic debris that [museums] already have thousands or millions of those specimens in their collection.” Once the item is reviewed and deemed not to be a treasure, the mudlarker can take possession.

The rules are not as tight in the U.S., however. But that doesn’t mean you can pocket something that appears valuable. “As an archeologist, I must emphasize that for things that are exceptionally rare that are part of our collective history, it really would be appropriate to notify the state historical trust or archeologist about them,” Miller says.